Stories from other beginners

Tom, Mehdi and Ralph all started the beginners’ course together in 2013. Tom had tried some judo before, but the other two came to the course with no previous experience. From not knowing each other before starting, they have become inseparable and graded through all their kyu grades together. In November 2015, just two years after completing the beginners’ course, the three of them came full circle and got their black belts – needless to say together. They also have a great track record from competitions, winning various medals throughout the years including a gold in BUCS 2015 and countless other competitive victories, and have now become invaluable regulars at Oxford Judo.

Oz, Sanna and Aaron all got their first introductions to judo at the beginners’ course in 2014. When not busy colouring his hair orange for ‘Lost’ and ‘Jailbreak’ and other shenanigans, Oz helped the men’s B team win a clean 7-0 victory against Cambridge in Varsity 2016. From doing bunny hops down the mat due to her non-existant gymnastic skills to being voted most improved cartwheel at the End of Year dinner in 2016, Sanna went on to win the title as national champion of her home country, earning her the right to represent her national team in the Nordics in 2016 and 2017, as well as winning her BUCS Nationals category as a blue belt in 2018. Now graduate Aaron took the reins at Oxford Brookes Judo and served a very successful term as president for the club in the 2015-16 academic year, and has since taken a job in Oxford and become a regular part of the city club. 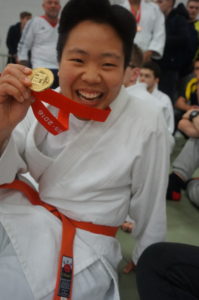 Shan joined the beginners’ course in her 4th year as an Oxford University DPhil student, and has this to say about her short but very successful time at Oxford Judo:

I was one of the new recruits for the beginners’ class run by Oxford Judo in 2015. As a final year DPhil student who had just turned 27, I was aware that I didn’t quite fit the profile of the average fresh-faced participant on the course. It was with much apprehension that I stepped into the dojo on the first day of the beginners’ class. I had never intended to stay on, wishing at the time merely to reminisce about a sport I’d had a brief experience with a decade ago in high school.

The incredibly structured approach with which the beginners’ class was conducted, coupled with the infectious commitment and dedication of all the coaches and players, impressed me well beyond expectation. Eventually, I was also granted permission to attend sessions on Sunday evenings. I was the only white belt in the class (the Sunday session was restricted to graded players), but was never made to feel awkward or out of place. Many of the senior players actively came forward to practice with me, taking the time to correct my multiple mistakes. It is perhaps a testament to the club’s patience and willingness to teach this frequently fumbling novice that five months on, I was on the podium at the BUCS Nationals receiving a gold medal in my first competition having scored four ippons against more experienced competitors.

Whilst I have since completed my degree and moved out of Oxford for postdoctoral work, the love for the sport which I encountered at Oxford Judo remains with me. One year on, in a club on the other side of the world, I still think about where it all began and what could have been had I committed myself earlier in my degree. If you are considering giving judo a try, I would strongly recommend you to go for it.