Despite our traditional rivalry, the two oldest University Judo clubs nevertheless enjoy a very happy collaboration in many ways, including building a relationship with university Judo in Japan. Oxford and Cambridge Judo is an informal organisation that brings together both current and former members of the two clubs for this purpose.

This has created opportunities for team visits between Japan and the UK for members of the Universities. Since 1990 several members of both the Oxford and Cambridge clubs, after visiting Japan for the first time through Judo, have subsequently attended Japanese universities for post-graduate studies and some have undertaken long term employment in Japan. 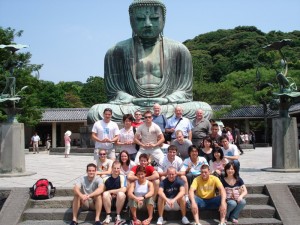 Since 1999 we have regularly welcomed student teams from some of the most prestigious Japanese Universities located in the Tokyo region (notably Tokyo University, Waseda Keio and Tokai Universities) to Oxford. In 1999 and 2001 we were pleased to welcome Tokyo University Judo Club to Oxford. In the summer of 2000 a combined team of Oxford and Cambridge members visited Japan as guests of Tokyo University. In 2004, a former Oxford President, Ryan Baron, who was a member of the team that visited Japan in 2000 spent a month in Tokyo as part of the final year of his academic medical studies and also participated in Waseda Judo club’s winter “kangeiko”. In March 2005 a group of students from a number of Japanese Universities representing the Tokyo students Judo Federation attended our 75th anniversary dinner and stayed in both Oxford and Cambridge as part of a two week tour of the UK. In August 2006 we were able to make a return visit to Japan with a group comprising 4 of our most experienced current members and one former member together with 9 others from Cambridge, London and Bath Universities.

Most recently we jointly hosted a visit from students of six different Japanese Universities representing the the Tokyo Students’ Judo Association. All these exchanges provided opportunities for increased cultural understanding as well being reminded that Japan, still the predominant Judo nation has much to teach us about our chosen sport.

This relationship started in the late 1980s when past members of the two universities came together to form an organisation, Oxford and Cambridge University Judo. Their purpose was to plan for a joint team of 25 former Oxford and Cambridge team members to visit Japan and compete against teams from some of Japan’s foremost Universities, a visit which eventually took place in August 1990. The Oxbridge team, all of them Dan grades, included a Commonwealth Games silver medallist (Winston Sweatman) and four women members, two of whom (Judith Affleck and Mary Ann Mehta) had been selected to represent Great Britain in the World University games in the mid 1980s. In terms of British University Judo this was a strong team but, in the 5 matches that took place in Tokyo and other cities, it was still generally outmatched by the strength of Japan’s university judo. This did not prevent the visit from being a resounding success and an experience that those who participated will never forget. The visit also achieved very wide press coverage in Japan: no doubt assisted by the fact that a leading national newspaper, Yomiuri Shinbun, was one of the commercial sponsors of the trip. 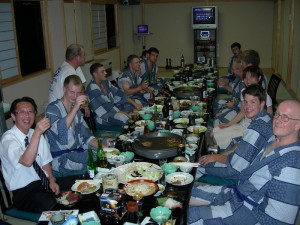 The team generated overwhelming interest and hospitality with numerous Japanese companies organising receptions, culminating in the team being received by the Crown Prince (himself an Oxford graduate) in the Imperial Palace – a very significant honour. Perhaps the only drawback was that, so ambitious was the scale of the visit and so lavish the hospitality received, that it has been difficult for the two clubs, with their limited resources, to repay the hospitality on a similar scale or, for that matter, for the Japanese themselves to repeat it, especially during the difficult economic conditions of the 1990s which hit Japan particularly hard.

Tokyo University and the Sasakawa Foundation

The Sasakawa Foundation is a Japanese charitable foundation dedicated to promoting cultural and scientific exchange and improved understanding between Japan (and especially Japanese students) and the rest of the world. In 1997 Dr Kenji Tsuge, a former captain of Tokyo University Judo Club and the then acting President of the Tokyo Universities Judo Federation was successful in securing a generous grant from Sasakawa. This led to a sequence of three visits from Tokyo University Judo club to the UK, in 1997, 1999 and 2001 (all hosted by Oxford and Cambridge University Judo) as well as a return visit to Tokyo by Oxbridge club members in August 2000. A stipulation of the Sasakawa funding was that the itineraries of these exchanges should include a number of events designed to widen the two groups’ understanding of each others cultures and economies, a requirement that was successfully met and added greatly to the value and enjoyment of the visits.

It was against this background that, in the year in which Oxford and Cambridge celebrated the 75th anniversary of the first Varsity match, 2005, we were pleased to be able to offer a week of hospitality in our two cities to a group of about 20 Japanese students representing the Tokyo Students Judo Association. In 2006 a group of British university students including 4 from Cambridge and 5 from Oxford visited Japan. This was a fantastic trip for all concerned. 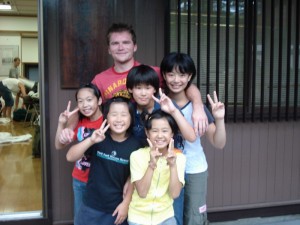