The annual British Judo Council Award Dinner was held on  Saturday 10th March 2012 in Charing Cross Hotel in London and Oxford Judo coaches Chris and Carol Doherty were amongst the guests of honour.

Carol Doherty received The Achievement of the Year Award, in recognition of her fight against cancer and her epic 400km fund raising cycle ride in Africa. In the photo, Carol is receiving the award from Lord Tope.

Oxford Judo would like to congratulate both of them for the awards that reflect their long lasting dedication to the sport. 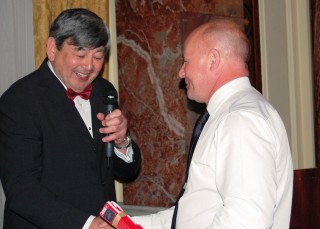