The stage was set.

The record to date was Cambridge 42 – Oxford 33, Cambridge dominated the early years from the inception of the Varsity match in 1930 until the late 1940s when Oxfords name begins to appear on the trophy. Since then it has been a much more balance affair with the majority of the last decade going to Oxford. The Varsity match is the longest running annual judo competition outside of Japan, it has run continuously since the donation of the Matsumada Cup by the Japanese ambassador in 1930 excluding the 2nd World war. The previous 2 Varsity matches had been won by Oxford in 2010 and 2011. Unfortunately the women had a 9 year winning streak broken last year, (temporarily) losing the Sake bowl to the women of Cambridge.

The days proceedings began with the Oxford City team taking on the the equivalent team from the other place. This was a fantastic match with some brilliant judoka participating and executing some equally impressive techniques.

Cambridge stormed into the lead winning the first 4 matches, the outlook looked grim for Oxford… This was however then followed by an unprecedented comeback, seeing Oxford win 3 fights in a row. The final fight saw British squad member Jordan Doherty fight a significantly  heavier opponent. Despite the 30kg weight difference Jordan fought valiantly but was unable to overcome her and was submitted seeing the final score swing in the favour of cambridge: Final result: Cambridge  5- Oxford 3.

The Mens B team was the next spectacle of the day, this year consisting of 6 players on each side. This was a particularly exciting match which culminated with  3-3 draw. In this eventuality it is left to Lady Luck to draw out a fight to be refought. On this occasion it was a repeat of the 1st fight, which had on the first occasion been won by Oxford. Unfortunately, despite Oxfords initial win of the fight, in an unfortunate turn of events Cambridge took an ippon and therefore the B team trophy. Final result Cambridge 3(+1) – Oxford 3

Following the loss of both the City and Men’s B team trophy the pressure was on the Oxford blues. They rose to the challenge. The Women’s Varsity squad in 2012 consisted of two former English nationals, an Aussie national (AKA “The Convict”) and two past BUCS medallists. The girls did not disappoint, justifying Oxford President Brad’s effort to book a one-way Cambridge-Oxford ticket for the Sake Bowl. The early morning training sessions undertaken by the team obviously paid off: only one fight went to full time, with all others being finished by Ippon in under two minutes.
Karen Kruska was the first Dark Blue to take to the mat, overpowering Cambridge’s Anna Baxter with a hold down in the first minute. Amy Ellis-Thompson spent less than two minutes on the mat against Cambridge Captain Megen Sorensen before throwing her for Ippon with Hari-Goshi. Competing in her seventh Varsity, Becky Banshee Bayliss took a grand total of 36 seconds to finish the match with an Ippon. Captain Jen Star was able to elicit a shido from her Cambridge nemesis before drawing the match to make it 3 – 0 to Oxford, before Izzy Routledge, giving away a considerable weight and height advantage, dropped Cambridge’s lightweight for a crowd pleasing seoi-nagi to seal the Oxford Victory. The final result was a 4 – 0 win to Oxford; bringing the Sake Bowl back where it belongs.

The final set of contests of the day saw the 8 Oxford blues take on their Cambridge counterparts. It was a match that was reminiscent of the battle of Thermopylae, not because Oxford was outnumbered but rather because they resembled Spartan’s; chosen and trained from birth to be gods of battle. Legend has it any one of the Oxford Blues can dispose of their enemies with as little as a stern glance. Cambridge did not know what was about to hit them.

The first contest saw previous president and captain Justin Gregory take to the mat weighing in at a substantial 109kg. Justin ‘Furry’ Gregory, fought well against his oponent and the fight quickly progressed to ne-waza. During the ne waza exchange the cambridge player attempted an illegal arm lock, (known as an oma plata to those unfortunate enough to delve into BJJ circles). The referee declared a Honsaku Make, therefore giving the first match of the day to Oxford. With the score set at 1-0, the current Oxford president, Bradley Joyce, took to the mat to face off with Kane Chandler – previously a BUCS champion and representative of England at the commonwealth judo tournament. The fight was extremely exciting with a high number of attacks coming from both players initially. The fight was looking promising for Brad against his potentially more experienced opponent when Kane attempted a leg grab. After consulting with the other referees, it was concluded that a second Hansoku Make would be placed against cambridge – taking the score to a controversial 2-0 in Oxfords favour. Next up was ‘Mad’ Max Denning, captain of the Oxford team  and author of this amazing vignette versus a his foe Ed Taylor. Some exquisite ne waza saw Max carry out a Juji getame (arm bar), and a transition into an osaekomi, the wriggly Cambridge player was lucky enough to escape only to face the wrath of the Oxford captain’s tachi waza. A few seconds later after the hajime Max threw the player for ippon with a sasae-tsuri komi goshi that was measured on the richter scale as far away as Timbuktu. 3-0.

Next up was the ex-captain from last years varsity winning side – Vit Sipal. In his last competitive judo fight before retirement Vit fought the current Cambridge captain Toby valiantly, throwing a wazari early on before unfortunately being pinned later in the fight, momentarily halting Oxfords seemingly unstoppable run of victory. Pawel, a judoka forged in the judo guilds of Poland was then next to beat his cambridge opponent, a sweet ippon saw the score proceed to 4-1 in Oxfords favour. With only 1 fight needed to secure the win Alwyn Clarke, the only fresher on the Dark Blues, dominated his fight eventually beating his opponent by ippon and guaranteeing the trophy a safe, warm, sexy home in the Oxford sports centre for the following year. Lui Miyake, a history finalist from Trinity put this years team down as one of the greatest succeses of recent years by promoting the score to 6-1 in Oxfords favour with what can only be described as a delicious, decisive, demonic display of Judo, marrying technique, speed and execution all in a single bout, winning by wazari wasetsu-ippon.

Henry ‘Leonidus’ Whinney was the lightest player of the team and fought like a true Spartan. Unfortunately Henry wished to stay faithful to the extended metaphor used in this report and succumbed to a lucky Hip throw from Cambridge’s Jesse ‘Xerxes’ Olszynko-Gryn. Final score Oxford 6 – Cambridge 2

Aristotle once said ‘We are what we repeatedly do, excellence therefore is not an act, but a habit’. At the end of the days proceedings Oxford had managed to retain the Men’s Blues Varsity title for the 3rd year running and regain the coveted Women’s sake bowl. Oxford has now made a habit of winning the Men’s Trophy.

A massive thank you to everyone who made the varsity match possible. A special mention goes to Bradley Joyce, the Oxford Judo club president for his work in organising such a successful day. A further thank you to all of the officials, players and most of all the spectators that made the event such a success. And who could forget a vast thank you to Cambridge for returning our Sake Bowl. 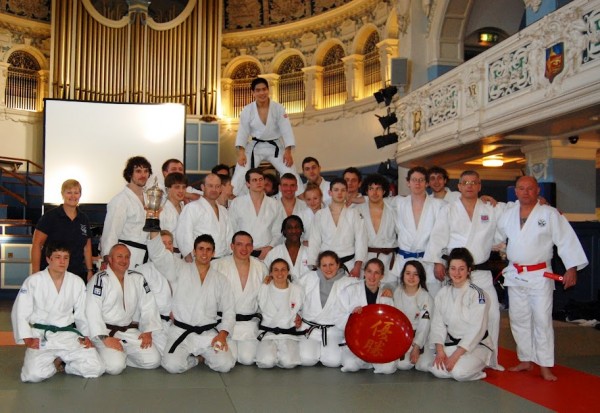