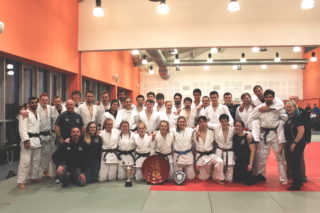 Saturday March 4th it was Oxford Judo’s turn to head to Cambridge to heed the call to fight in the 88th annual Judo Varsity Match. Having started in 1930, this is currently the world’s longest ongoing annual judo event.

Up for grabs were the Men’s A Matsudaira Cup, the Women’s Sake bowl, and the Men’s B and City team trophies, and after not having the complete collecting on display a few years in a row, Oxford Judo was keen on getting their hands on all four once more.

The City team opened Varsity as usual, with Henry being first man on the mat for the fifth year running. True to tradition, Henry also gave the first ippon of the day, making that five Varsity wins in a row, and the torch was passed on to Tim. Facing one of the Cambridge players, who continues to cause us grief each year, Tim had to give in to some excellent ne-waza. Next up was Dr. 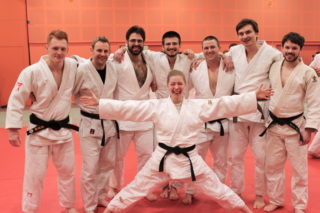 Tom Roach, as he is now titled, and proving he is a City team solid, he whipped out his trusted old drop knee Tai-otoshi and held his opponent down for the waza-ari awasete ippon. Latvian terror Andrew Serdega followed suit, throwing a top level Cambridge player with a perfect drop Seoi-nage. Going into the fifth fight with a 3-1 lead, the City team looked well on their way to retaining the trophy, but unfortunately Oleg, Sam Knight, Eduardo, and Emma all drew the shorter straws, with Emma and Sam both going the full time and losing by a yuko and a shido respectively. Eduardo’s fight was especially endearing for the Cambridge spectators, as our former Cambridge student faced his old coach in the heavyweight spot. Speaking of heavyweights, it is a shame that the city team is only allowed to submit one woman each, as the weight differences can often be the determining factor of the outcome of the fight rather than the players’ actual judo skills. These differences have sometimes worked in our favour, but this year it was a disadvantage, and it would be lovely to see the City women be able to fight on competence rather than physicality.

First of the university teams to duel was the Men’s B, which again had multiple black belt players in the line-up. Even though they like to charm with their goofy banter on the sideline, once on the mat they left nothing up to chance. In control from first ‘hajime’ was BUCS gold medallist Alex, as he showed his opponent no mercy when going in for one attack after the other, ending the fight with finally achieving the ippon he was after. After dominating his opponent the whole fight, Sam Garforth had a less satisfying ending, but a win nonetheless, as his counterpart was awarded four shidos for hansokumake. Hopefully you didn’t chose a cheeky toilet break right after, as captain Tom Chandler threw for a yuko into a holddown, ending the fight after half a minute, and keen to one-up him, Sam Acreman provided the fastest win of the day with a footsweep for ippon in only nine seconds. Collectively they spent 10 hours travelling to fight for a total of 41 seconds. Even if the trophy had already been secured, Quincy wasn’t slightly bothered by his opponent, as he calmly awaited for his opening to throw, and eager to be part of the team-momentum, Niall again mastered the quickstep and delivered another waza-ari awasete ippon in 27 seconds. Last man out was Rob, who went straight for a determined O-soto-gari, but was unfortunately caught in a quick counter into a holddown. 6-1, and the Men B could take home the trophy the second year in a row. 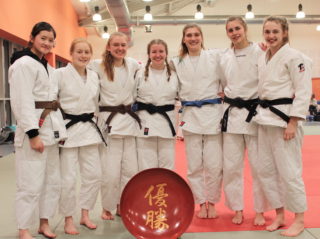 Coming in strong with gold and bronze individual medals and a team silver at BUCS, the women team’s line-up was stronger than ever with three black belts, one brown belt and one blue belt, and plenty of high-level substitutes to contest the spaces. The women’s lightweight, and the club’s newest black belt Ellie started the women off perfectly with the first win, and Ella, Rachel, and Claudia all delivered emotionally satisfying ippons to leave the women up 4-0 with one fight to go, and therefore sure to take home the trophy. As Varsity is fought in ascending order regardless of actual weight class, our heaviest player, who is a middleweight, was faced with a Cambridge heavyweight player 40 kgs her superior. Being given the option to forfeit her fight because of safety concerns, women’s captain Emily nonetheless opted in, as she hadn’t come all this way to miss out on her fight. In an awesome display of fighting spirit, she went out with all guns blazing, but had to succumb to the sheer discrepancy of the odds. This ended the match at 4-1, and the women could finally celebrate with the long-awaited Sake bowl engraved with “victory” in Japanese. 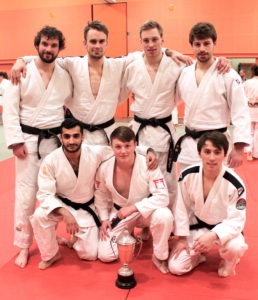 The last match of the day included all the big shots, as Oxford again provided a stellar Men’s A line-up of international level black belt players, this time representing five different countries. James and Mehdi opened the show with each their sacrifice throws for ippon, and captain and GB squad player Pete came back onto the mat from a serious injury just to put in one last ippon in his final Varsity match. Securing the tie-breaker in the fourth fight, OUJC president Gregor made sure the Matsudaira Cup was coming back to Oxford, but the rest of his team wanted their share of the day too, as Daniel delivered a well timed drop Seoi-nage, and Ben strangled his opponent into oblivion. Forever a dark blue, but at last an Oxford University student, Varsity veteran Matt could finally end the show with his signature ‘Uchi-Matt-a’, thus securing a clean sweep for the Men A’s second 7-0 victory in a row.

With the end score of 20-7 in Oxford’s favour, cheering for the dark blues was a treat with beautiful throws coming from all directions. Around the world hundreds of people were following our fighters in real time through the club’s live-stream on YouTube, and players could log back onto social media for well-deserved greetings from parents, family and friends congratulating them on their flawless performances. It was indeed a delightful day to shoe some tabs, even if we did it barefoot.

Team photos are on our Facebook group, and the YouTube live stream can re-watched here with complete individual time tags for all fights.