Weekend update from home and abroad 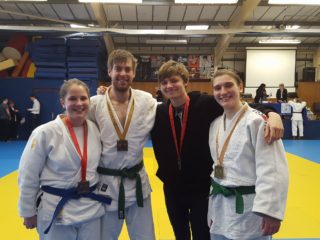 This Saturday saw five judoka from Oxford compete from as close to home as High Wycombe and all the way to Germany, where kyu grades attended the Northern Home Counties Cup, while grand old man Jim Birnie took on the Berlin Open.

Northern Home Counties Kyu Grade Cup
At High Wycombe Alexander Bridge competed in his first high grade bracket since getting his blue belt, and put in a great effort against other brown and blue belts in the u66s, ultimately leaving him with a bronze. Sam Acreman on the other hand fought his last competition as a green belt in the u73s, beating all his competition in the lower grades bracket with four ippons and the gold medal.

Female participation was higher than normal, with blue belt Sanna Djurhuus fighting two strong brown belts in the u78s to come away with bronze. Green belt Claudia Havranek didn’t seem to be bothered by the mix of grades in the women’s u70s, beating three brown belts to return home with the gold medal along with a great photograph of herself outshining three 1st kyus on the podium.

2016 Berlin Open
In Germany Jim Birnie entered as a GB national masters champion in one of his favourite competitions, the Berlin Open. 12 nations attended this year, with the furthest distance this time around having been covered by an Israeli judoka. 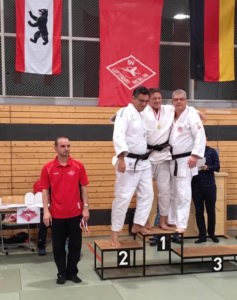 As always it was very well advertised and organised, with three competition areas in the Anne-Frank gymnasium, and only costing a €10 entry fee. Although sporting a bad cold, which greatly restricted his performance, Jim fought all three competitors, losing one by ippon, one by yuko, and winning the last with ippon to secure him the bronze. The gold was won by a Polish judoka, with silver going to a Spaniard.

Brookes Judo Club Grading
Fast forward to Sunday afternoon, where Matt Edmans supervised the accomplishments of the Brookes Club’s members this semester with a well deserved grading. Flying through the syllabus after completing the beginners’ course were Stephanie Patterson and Michelle Schröder, who graded from novice to red belts, and João Santos, who graded from novice to yellow belt. Entering the BJA with former judo knowledge were Louis Trebucq and Geoff Smith, who graded from (on paper) white to green belts, and regulars Hassan Khushi and Sam Acreman went one higher with their new blue belts. 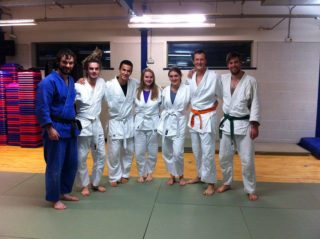 Big congratulations to all the effort put in this weekend, and we look forward to seeing everyone sporting their new belts on the mat.