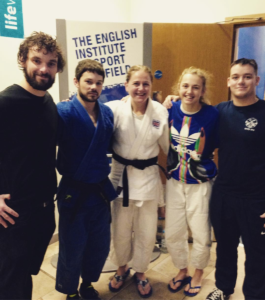 In a weekend filled with everything we love about judo – competitions, gradings, and socialising – Oxford Judo had something for everyone.

In Sheffield four of our English players had qualified to fight in the British Senior Championship this year, with Rachel fighting in the women’s u63s, Abbie in the women’s u70s, Henry in the men’s u66s, and Matt in the men’s u90s. Alongside them was Liam who was matside coaching for their matches. Fighting the best of Britain is no easy ordeal, as our players faced tougher competition than ever. However that did not stop Rachel from showing off the hard work she’s put into her judo the past year by finishing 5th in her hardest competition so far.

Back in Oxford Carol and Chris had arranged a kata seminar for our players to educate us in one of the often overlooked, but nonetheless crucial aspects of our sport. After the seminar OUJC president Gregor stayed behind to finish his 3rd dan theory, further adding to his achievements as a player, captain, coach, and president during his time at Oxford.

In the evening Greg Mook once again hosted the Christmas social to mark the ending of another great year of judo. Indeed we have many things to celebrate in 2016 as a record number of beginners finished the beginners’ course, a record number of university players entered BUCS, and more players than ever are consistently coming to training and contributing to an awesome sports-environment at our club.

Well done to all on all of your accomplishments this year, and we’re looking forward to many more to come in 2017.