Huge congratulations are in order for Oxford Judo judoka Becky Bayliss as she takes the highly prestigious Oxford University Sports Federation award for “Sportswoman of the Year” in 2010! This long-awaited and highly deserved prize recognises Becky’s outstanding talent, consistent competitive successes, and her huge contribution to Oxford Judo over the years. 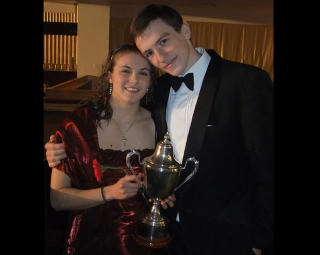 At the OUSF award ceremony on Thursday 25th November, Becky was highly praised during the presentation:

“2nd Dan grade Rebecca Bayliss is studying for a DPhil in Cardiology and is a former Women’s Captain and a successful President. She has been exemplary both in attitude towards training, enthusiasm and encouragement of the other women on her team, as well as giving high performances at an international level, inspiring others and leading by example. Rebecca won bronze in the Commonwealth Games in Singapore in January 2010 and became the British Universities Champion for her under 57 kilogram weight group, competing against a high standard of Judo players from universities nationwide and remaining undefeated. The women’s team managed to win the British Universities Teams silver medal in part due to her contribution. Becky defeated the President of Cambridge University Judo Club in the annual Varsity match, helping ensure her teams overall success.”

Oxford Judo unites in its congratulations to Becky on this fantastic achievement.