It has been a long time coming but now Oxford Judo can say that we are the best Sports Club in Oxford! Well, we have been saying it for years anyway, but now we have a huge trophy to prove it because (cue drum-roll) … On Thursday 25th November, Oxford Judo was named as Oxford University Sports Federation “Elmer Cotton Sports Club of the Year”, 2010. 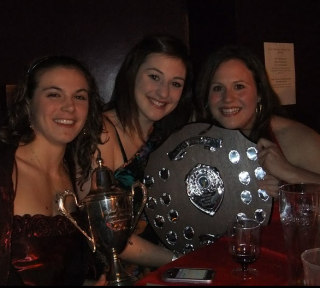 It is hard to sum up the huge amount of dedicated work and long list of achievements that have resulted in this award in just a few words. In presenting the award to this year’s President Karen Kruska and our Women’s Captain Amy Ellis-Thompson, the assembled crowd was told by the Sports Federation President of our successes:

“In the last academic year the effort of both players and coaches has produced Varsity champions, 9 BUCS medallists, 2 Commonwealth Championship medallists and members of the Great British squad, in one of the most successful years in the history of the club.”

As all members of the club know, our strength and success comes from much more than these headline results. It is founded on the consistently dedicated coaches, the talented and committed players, and the club dynamism and focus that few other sports clubs in Oxford, or anywhere else, can hope to match.

In the words of our esteemed Chairman Dr Tony Buley,

“We have especially to congratulate all our medal winners during the year (both teams and individuals) and our dedicated coaches who inspired and supported them but the award is also a recognition of the tremendous spirit that pervades the whole club, competitors and non-competitors alike, and whatever their grade.  I see this every time I come along to watch a training session and I receive similar reports from the many sessions I don’t get along to. You have all contributed.

“I want to pay a special tribute to Andy Stewart and Karen Kruska, the two OUJC Presidents who have held office during 2010 and whose commitment and organising abilities as well as their own competitive skills have been so crucial in us achieving this award. I know how hard they have to work; being President isn’t an easy job. I have already mentioned our coaches but the same comments can be made about Chris and Carol Doherty. Thank you all four.”

Over the coming months and years you can be assured that Oxford Judo will strive to build on this success and to take Oxford Judo to even greater heights! Well done everyone.