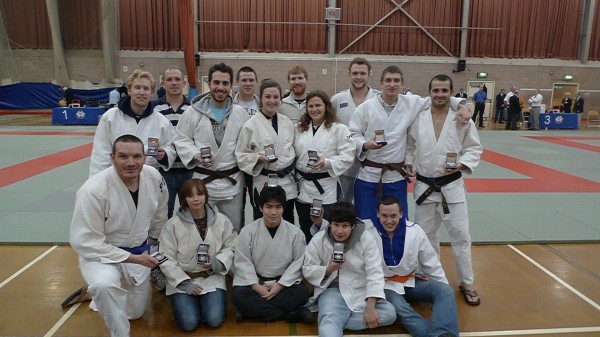 In another resoundingly successful year at the BJC’S National competition, the vast majority of Oxford Judo’s 15 attending players, including 7 kyu and 8 dan grades, did not go home empty handed. All players showed an exceptional performance and added to a good atmosphere at this very well organised event. At the end of the day Oxford Judo claimed 12 medals:

After an early start for Hereford at 6am in the morning, the first challenge for many of the 15 players was the weigh-in. The first to go on the mat were the Kyu grade light weights, and so it was Emma Burnett and Lui Miyake who collected the first medals of the day for Oxford Judo.

Emma had to concede her first fight to a strong opponent, but came back strongly and forced her second opponent into submission with a well-executed strangle. Her final fight was won against former Cambridge player Alexie Fritze-Williams by a referee decision for silver.

Lui showed some of his most beautiful judo starting off with a huge seoi-nage for ippon in his first fight. He kept demolishing his opponents with big ippons and also took silver in the end.

Next to stand up for Oxford Judo were Bradley Joyce and David Passarelli. Brad pulled off some great backwards techniques for ippon against heavier opponents whilst David was on top form with a successful tai-otoshi. Both won three out of their four fights to add two more silver medals to the ever-increasing haul.

Both Nick Rounthwaite and Matheusz Michalik fought in the strong U73s category. Nick gave a strong performance, taking his much more experienced opposition the full distance, but unfortunately not medalling this time. Matt started off with ippon for a big throw in his first fight and continued with another win for waza-ari. In his third fight, his opponent was disqualified with an indirect hansoku-make. Despite being unlucky in both of his toughly-contested remaining fights, Matt came home with a shiny well-deserved bronze medal.

The last player in the kyu grade section was Sam Knight who won three fights, one of them with a crushing hip technique, and was awarded bronze.

In the Dan grades u70 kilos, Amy Ellis-Thompson had to face some familiar players. In her first fight she beat former OJ player Ephanielle Verbanis in a close contest decided by referee decision. In her second fight she beat Hannah Newton by yuko to take the gold medal.

Karen Kruska was next to compete in the dan grade women’s section. After conceeding her first fight, she stepped up her game to win her next two fights to heavier opponents, taking another silver medal.

Ben Clifton, Jean-Serge Mariani, Greivin d’Angelo and Sam Hoggard started in the busiest category of the day – the dan grade U73s category. Greivin d’Angelo, having weighed in at only 66.2kg, was most successful. Three big ippons against his much heavier opponents and a loss after a debatable referee decision brought him a silver medal. Sam, also having only just missed the U66 category, fought extremely well in a competitive field. Ben Clifton won two of his four fights in a determined and strong performance and narrowly lost out on a medal, ending 5th. JS won a bronze medal after three smashing ippons and one loss, also displaying some fantastic judo.

James Shepherd competed in a difficult weight category, showing some great judo despite having started with an injured shoulder, and sadly not medalling this time.

To conclude, it was an extremely successful weekend for Oxford Judo with lots of beautiful judo and a terrific team spirit being displayed once again.