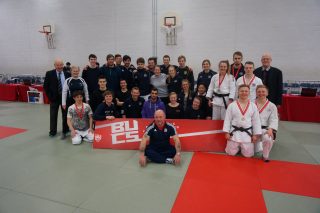 Friday night – Arrival
On the night of February 19th a staggering 25 judoka from Oxford Judo headed off to Sheffield to compete in the British University and College Sports (BUCS) championship. Together they represented four universities (Oxford University, Oxford Brookes, LSE, and Exeter), and had entered in almost all categories, both men’s and women’s dan and kyu grades, and Oxford University men’s and women’s teams.

The trip started as has become somewhat a tradition with some nerve-rackingly close calls at the weigh in, but fortunately all dan grades participants made their weights and could enjoy their post-weigh in dinner that evening.

Saturday – Dan grades
Early Saturday it was the dan grades fighting with almost continuous Oxford representation on the different mats. Gregor Cremosnik, Daniel Mayhew, Ben Skretting, and Khalid Mohsen all won their pools in the men’s u81s and progressed to the knockouts. Tom Roach and Will Johnson were pooled together in the u73s, and they both won one each before Will won their duel, thus putting them both through their pool. Rachel Wheatley was then up in the u63s, Emily Hampshire in the u70s, Ellie Ridge in the u52s, and Sam Richardson in the o100s.

Rachel won against the Cambridge president (very exciting), and lost against the current British champion, so she progressed to the knockouts as 2nd in her pool. Next on the mats were Tom Johnson and Mehdi Imani in u66s, and Rob Stemmons in u90s. Tom Johnson, who represents LSE but occasionally trains with his brother at Oxford, won both his fights and progressed to the knockouts. Sam took bronze in his round robin while Emily, Ellie, Rob, and Mehdi were eliminated in some super fierce pools.

Before we knew it Pete Miles and James Fowler had already gone all the way and won each their place in the all-Oxford u60s final. Pete came out victorious to claim gold, with James taking silver. Simultaneously Rachel, Will, and Tom Johnson had reached the finals in their respective categories, and Ben and Gregor were in each their bronze matches. Will and Tom both won gold in their categories while Rachel won silver against the same woman she had lost against in her pool earlier. Ben Skretting took bronze in what was probably the largest (and maybe the toughest) category of the day.

The night terminated with all kyu grade competitors making their weight, and with 7 shiny medals already in hold it looked like it was going to be a great weekend away. More than that – with 4 spots in the finals Oxford University secured 4 representatives at the European University Games in Croatia in July.

Sunday – Kyu grades and teams
On Sunday it was time for the kyu grades to face their opposition, while the dan grades once again had to put their game faces on to fight in the teams competition.

Since Oxford had not entered a women’s team the previous year they were unseeded and therefore ended in a very tough pool including the two teams that would ultimately win and take silver in the competition. In the women’s penultimate fight of the weekend team captain Rachel unfortunately sustained an injury, leaving Ella to step in last minute to join Ellie and Emily in the last match against our arch rivals Cambridge. Nevertheless in an awesome show of strength our women beat Cambridge 2-1, leaving us with good hopes for the upcoming Varsity match.

The men’s team’s road to glory was jaw dropping and awe-inspiring, as they match after match pulled off the most amazing ippons and fighter spirit. With their starting line-up of Pete, Will, Gregor, Ben, and Rob, they crushed Durham 5-0 and Imperial College London 4-1, before losing a meagre 3-2 to Anglia Ruskin. They were then through to the quarter final where they beat Glasgow 3-2, and in the semi final Daniel subbed in for Gregor to eliminate Nottingham with another 3-2 victory.

It was the very last event of the day as our men stepped onto the mat to face Anglia Ruskin once more in the final, and in one of the most intense showdowns of the year our men sacrificed every inch of their remaining energy against some of the toughest competition in the country. The crowd was roaring, but unfortunately for Oxford the Anglia Ruskin team proved marginally stronger and took home the gold with a 3-2 victory. Regardless of the outcome the Oxford crowd was more than pleased, as we had been treated to some stellar judo all round.

We left Sheffield on Sunday night chuffed after seeing outstanding performances from our university players, and looking forward to the results our players are going to produce in the upcoming future. This weekend was a show of force of the current state of the club, and indicates some good times ahead.