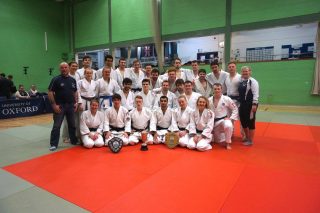 This Saturday saw Oxford host the annual Varsity match against Cambridge in the main hall at Iffley Sport Centre. Oxford University was coming in especially strong after securing 3 golds, 4 silvers, and 1 bronze in both the dan grades and the kyu grades at BUCS last weekend, and with the men’s team winning an impressive silver in the team competition. On Saturday the atmosphere matside couldn’t have been better as club members from both cities filled the spectators’ seats, and plenty of Oxford judoka had gathered support on the sideline from their college- and coursemates, providing loud cheers and shouts of encouragement during the fights.

And what a day to be a dark blue supporter with men’s A and B teams each winning a clean 7-0 against Cambridge, and the city team winning 5-3!

Cambridge women proved marginally tougher in the women’s match, beating Oxford 2-3 in a set of even fights.

A big thanks to Cambridge, to the staff working at Iffley, and to the officials for a great Varsity match and socialising afterwards. We look forward to another great event next year.

Team photos provided by Sanna can be seen here, while Frank and Julia snapped some sweet action pictures for our Flickr account.

All Oxford ippons were also captured on film and compiled in this heartwarming montage of sheer judo beauty. Enjoy.