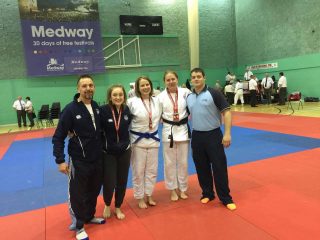 To wrap up a succesful university term a few Oxford judoka headed down to Medway Park in Gillingham to participate in the 2016 Kent International Open. We managed to only get a little lost and still arrive in time to sweat off the last remaining weight for the 9 am weigh in.

Our recently graduated coach Liam Hart had taken the time to come down to help us with matside coaching as a last gesture before leaving for several months to the Falkland Islands with the RAF. And what a job he did!

First on the mat were Georgie Allsworth in u63s and James Fowler in u66s in the juniors division. Georgie managed to come away with a bronze and 10 points towards her 1st dan. She had one second left in an oseakomi that would have secured her another ippon and 10 more points, but unfortunately such is judo… James secured himself silver in the juniors after fighting a teammate from his homeclub in the final. It was a close final where both players knew each other well, so it was won with the smallest margins.

Next up was Abbie Clayton u70s in the masters division where she threw for ippon left and right and secured herself yet another gold medal. After bashing up the masters she then took on seniors, where she managed to win silver in a category against some equally tough ladies.

In one of the last categories of the day it was finally Sanna Djurhuus‘ time to fight in the u78s seniors. After only recently getting her blue belt she managed to throw a brown belt twice for waza-ari-awasete-ippon before losing to a fierce 5th dan and thus securing silver in her second dan grade competition.

London based Tom Johnson who joins the mat at Oxford judo with his brother from time to time climbed to the top of the seniors u66s to secure another gold medal.

All in all a great result in Kent and a great day out.