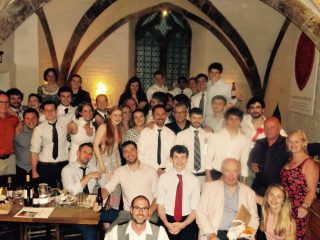 Almost 40 fabulous members from on and off the mat gathered in full formal wear in the beautiful Vaults and Gardens to celebrate the end of a terrific year for Oxford Judo.

After munching on some delicious dinner the president Rachel Wheatley thanked the committee for their work the previous year and handed them tokens of gratitude. Handing over their positions were Khalid Mohsen as treasurer, Ben Skretting as secretary, Gregor Cremosnik as men’s captain, and Ellie Ridge as women’s captain.

Oxford Judo’s Chairman Dr. Tony Buley also thanked Rachel for her tremendous work this past year, helping to lead the club to lots of success both competitively and socially. He also thanked our tireless coaches for their continuous voluntary work, and especially head coaches Chris, Carol, and Jordan Doherty.

It was then time to announce this year’s awards. 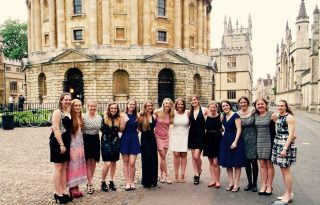 This year’s best beginner was Claudia Havranek, most improved player was Tom Chandler, and most valuable player was Rachel Wheatley. 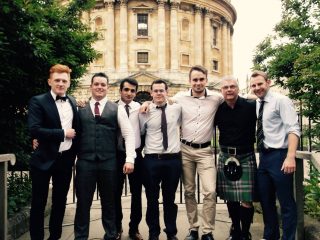 Last but not least on the agenda were the fun awards to recognise players who had made a mark throughout the year in various different ways. Andrew Scott provided the “ippon of the year“, Liam Hart was “sweatiest judoka“, and Ella Joyce won “Mrs. Muscle” while Ben Skretting and Henry Winney tied for “Mr. Muscle“. Gregor Cremosnik proved to be “diva of the year“, Sanna Djurhuus had the “most improved cartwheel“, Rob Stemmons the “most open neck“, and Mehdi Imani was voted “most likely to forget his belt“.

The festivities then continued until the early hours with everyone looking forward to a well deserved holiday to come.