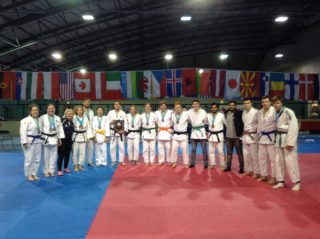 A new university year has started, so it was again time to drive down to Southend-on-Sea to participate in the well organised Southend International. This time we brought a whole minibus full of fighters, driven by the one and only Queen of Reversing, Carol, plus another car full of Brookes peeps.

With a few people weighing over their categories (if anyone asks it’s all muscle), some game plans had to be altered, but nonetheless players were ready, and it was especially exciting for our three first time competitors Ashleigh Eva, Hassan Khushi, and Niall Moon.

Ashleigh fought in the u63s, and although being the lowest grade by far, she caused all the other girls grief with her snappy moves and winning attitude. In the end she took home her first ever judo medal, a shiny bronze. Hassan and Niall met each other in their very first fight in the u90s with Hassan scoring an ippon, but since their pool ultimately drew in scores, they had to fight the pool again. This time Niall came out victorious, and ippon after ippon Niall won all the knockouts. In the final he was close to taking it all, but with a little more technical experience his opponent managed to get the ippon, and Niall took silver. An amazing result in their first competition.

Simultaneously the other kyu grades were fighting with Alexander Bridge in the u66s, Claudia Havranek in the u70s, Dominic Clearkin in the u73s, Sanna Djurhuus in the o78s, and Sam Acreman in the u81. Alex took matters into his own hands and won all his fights, thus securing a very well deserved gold. Claudia beat one contender after another to claim silver, and Sanna’s pool turned just in her favour, with everyone winning a fight each, but Sanna being the only one to win by ippon, therefore securing another gold. Sam also took silver, thus bringing the medal tally to 6 for the kyu grades – 2 golds, 3 silvers, and 1 bronze.

In the Dan grades Thomas Chandler had entered as a brown belt for the first time in the u73s, while Sam Richardson faced men the size of small mountains in the o100s. Oleg Molderov, Christian Mc Nerney, and Andrew Serdega all fought in the u81s, with Andrew ultimately getting the bronze in a weight category above his normal one, and a significant weight difference between him and the other players. Mehdi Imani secured his first Dan grade medal by winning bronze in the u66s, while Rachel Wheatley, Emma Burnett, and Abbie Clayton all took more medals in the women’s high grades. Bronze for Emma in the u57s, bronze for Rachel in the u63s, and silver for Abbie in the u70s. Emma and Abbie also fought in the masters, both going one-up with silver for Emma and gold for Abbie.

13 medals later, and the awards didn’t even stop there. After all the medals had been handed out Christian was called to the rostrum to receive the “Player of the Day” trophy for outstanding spirit in his performance, continuing to fight after an injury and showing great sportsmanship throughout the whole competition. Sportsmanship was a keyword throughout the entire day, with everyone having support matside from their fellow teammates and coaches, and lots of cheers and good advice going round. We then lined up for the traditional group photo, this time displaying 11 nationalities: Faroese, English, USA, Thai, Spanish, Brazilian, Irish, Latvian, Persian, Russian, and Canadian. 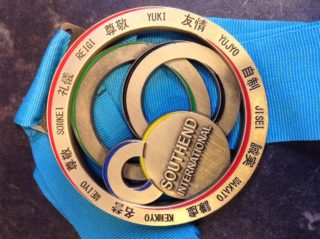 During the post-comp munchies we all agreed that the medals were especially nice this year, though none of us really knew what the inscriptions on them meant. We were fairly sure it was Japanese words written in both Japanese and Western characters, but no one could crack the code. We had to turn to Google Translate for some help, and after being able to decipher “courtesy”, “honour”, “morality”, and “snow” (?), we realised we had been looking at judo’s moral code written in Japanese. Oops. Sorry Chris… Now we know…

Photos and videos from the event can be found in this Dropbox folder.

Update from Sunday, as the competition wasn’t yet over. Shane Price went back to the mat after a 10 year hiatus, and with all his family plus friends on the sideline he fought his way to win gold in the masters. What a champion performance, and with that final achievement the total count from Southend amounted to 14 medals and one trophy – 4 golds, 5 silvers, 5 bronzes, and a Player of the Day.