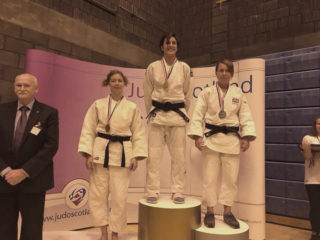 This year’s British Masters was held in Edinburgh at the impressive Meadowbank national stadium, and representing Oxford Judo were deadly sweeper Emma Burnett in the F1 category (over 30) and the lightweight open, and Tomoe-Nage excellence Jim Birnie in the M7 category (over 60).

Proving that even when entering in a masters competition, age is still just a number, Emma had bravely opted to lodge in a youth hostel overnight. On minimum sleep (but maximum rejuvenated spirit) she tackled first the F1 u57s and then the lightweights open, and in a day full of waza-aris she went on to win two shiny bronzes. 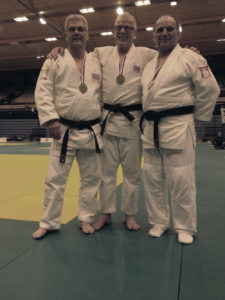 In Jim’s category they had amalgamated the u90s and u100s, but as anyone coming to a randori session will know, Jim doesn’t discriminate – he throws everyone equally. His first fight was won by ippon with an Ippon-Seoi-Nage, and in his second fight against the u100 player he pulled off an Uchi-Mata to score him a waza ari, thus earning the flying Scotsman the gold and another year of proudly carrying the British Master title.

Both were accompanied matside by Chris in a really lovely and well organised event.