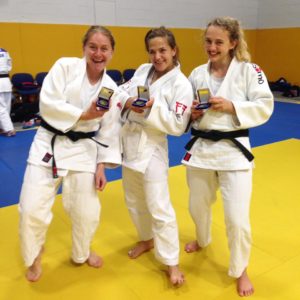 The Bev Price Memorial Teams Championship was held in Walsall on Saturday, and Oxford Judo had entered a men’s team and a women’s team.

The men’s team, which was aptly named “The bearded scientists”, consisted of Henry Winney, Matt Edmans, and Gregor Cremosnik. Six team were entered, so they fought in a round robin, and the Oxford scientists absolutely smashed it, winning every match to claim the gold.

The women’s team was formed by Rachel Wheatley and Abbie Clayton from Oxford Judo, and due to a cancellation from an injured third player, Verity Stephens from Team Red Star subbed in. The ladies also fought in a round robin against five other teams, and proving they meant business they won almost every match 3-0 to also come out victorious.

Amazing results from a great Oxford collective, and big thanks to Verity for sharing her talents in true judo spirit!

As it was a memorial event, Andrew Haffner from Samurai Judo Club did us the courtesy of providing the background story of the namesake of the competition, Beverley Price:

Beverley Price was a member of Samurai Judo Club. At the age of 23, in November 1997, she was at the peak of her powers. An U52 kilos player, she was 2nd dan but with already 150 points towards her 3rd dan (in those days you needed 200 points at first and then it dropped steadily to 100 when you had held the grade for longer). She was number 2 in the British Senior rankings and next event of the year would have been the British Trials, after which, mathematically, she could finish no lower than third and would almost certainly have finished second. In those days the rankings decided the British Squad places. She was also a club coach, teaching the juniors at our club, and a referee, and had also recently won gold at the British Kata Championships. Hugely liked and respected both inside and outside the club, she was a great competitor and a great coach.

Sadly, she died on November 23rd 1997 when a gambling addict she was trying to help turned on her and killed her.

It blew a big hole in the club and the following year we started the Bev Teams as a memorial to her. The event grew and grew and we were very much supported by many of her friends and regular opponents on the competition circuit. For several years, a number of Olympians competed at the event and at its peak we were running on five mats with around 25 men’s teams and 10 women’s teams, and often up to 20 teams in each of the junior categories, as well as teams from abroad. In recent years it has grown quieter, with fewer clubs able to field teams these days and more focus on ranking events, but it still remains a popular event for many.

Next year, as it will be the 20th anniversary of Bev’s death, we are pushing the boat out by taking the event back to four mats at Walsall and doing everything we can to attract a large entry.