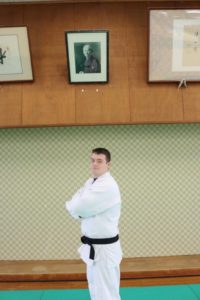 The first national event of the year was this week’s Scottish Open, and below is the report from Liam Hart, who represed Oxford and the RAF at the event.

I arrived in Edinburgh the night before the completion, staying in a military accommodation in the beautiful Edinburgh castle, which is a famous attraction in Scotland. I felt prepared, weight was in check, and motivation was high.

On competiton day we woke up early and headed to the Meadow Bank Arena, where I weighed in perfectly in the under 90s. After the weigh-in I liaised with my coach and we resorted to waited for the order of fights to be announced, as my nerves were slowly building up. This was going to be my first fights of 2017 with ranking points for the new year on the line.

When they called my name I stepped up to see that my first fight was against a fellow service from the Army. Seeing this spurred me on even more to get a good fight in, and after a good three minute battle he made a mistake with his throw after which I reacted quickly with a rolling strangle that came on perfectly. First fight down and the Army captain defeated, and with one ippon under my belt my nerves were settled.

My second fight came shortly after against a strong full-time athlete from Croatia. Not showing any slack in his performance, and looking like being the stronger player, I made a crucial error, which resulted in him throwing me for waza-ari and from there holding me down for the ippon.

Feeling disappointed from my mistake and understanding what I did wrong, I motivated myself again for my fight to enter the bronze medal match. I came out strong and swept him twice for yuko, but continued attacking to try and get the big score. He caught me in a counter to score a waza-ari, so I tried again with a drop Seoi-nage, but it only yielded another yuko. As I tried my final attack, he leaned back and waited for me to do most of the work, before he countered for another waza-ari, and the win was his.

My day was therefore over, and although I was pleased with my overall performance, I was a little disappointed to not come away with more. Nonetheless I know where I went wrong and what to improve on in training, and this competition gave me my first ranking points of the year to currently put me at the British rank of 26th.