Oxford Judo was delighted to welcome a group of Japanese high school students and their group leaders to visit our beautiful city over the Christmas Holiday. As most students had already left for home, they were shown around by our Chairman Dr. Tony Buley with good assistance from our coaches and resident players, as well as very helpful translators. As Dr. Buley remarked, nurturing this contact with Japan enables us to get a fuller appreciation of our sport, as we all know judo to be about much more than just achieving physical gains and winning medals. Most of us continue to enjoy our discipline because of the strong culture surrounding it, and being able to welcome our Japanese guests, and also to have the ability to visit Japan through Oxford Judo’s contacts adds a dimension to our practice that makes judo so much more than just a sport.

Below is a report from Dr. Buley of the visit.

On a clear cold and rather windy day just before Christmas, Oxford Judo welcomed a group of 16 Japanese high school students and their group leaders whose visit to the UK was sponsored by Tokai University. Tokai is a multi-campus University which, among its many other academic and sporting merits, has produced many great Japanese judo champions, including perhaps the most famous of all, the great World and Olympic Champion Yasuhiro Yamashita. To reinforce the point, five of its current students and alumni together won 5 medals at the Rio Olympics, something to which Oxford Judo has yet to aspire!

Tokai also has a very strong educational outlook, based on the philosophy of its Founder, the late Dr. Shigeyoshi Matsumae, which encourages strong links through judo with educational institutions throughout the world. This is something from which OUJC members have benefitted during past visits to Japan so we were delighted to be able to offer some reciprocal hospitality to the “Tokai Team” by providing 24 hours of intense cultural education to round off their participation in the annual judo camp held a Tonbridge School in Kent in mid-December. 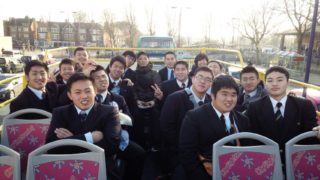 Arriving for a quick lunch at the YHA, where they stayed overnight, we were all transported around Oxford by the open top sight-seeing bus (ideal for taking photos, not ideal for avoiding hypothermia) between such iconic locations as Christ Church (known for Cardinal Wolsey, Henry VIII, Alice in Wonderland and Harry Potter) and the Natural History Museum (with an impressive collection of dinosaurs and a great deal else). Add to those the Radcliffe Camera, the Bridge of Sighs and the Bodleian (with a copy of every book ever published in Britain and – allegedly – an underground passage) plus Trinity College and the Sheldonian (which can boost itself of Sir Christopher Wren, hosting the university’s degree ceremonies and having one of the best roof top views of Oxford). The tour surely gave them a feeling of the more traditional side of Oxford, even if they only got to spend 24 hours with us.

With all that ancient history and stonework, we were grateful to Gregor and Rachel for restoring the perception of Oxford as a modern scientific university by organising short tours of their respective laboratories in South Parks Road where, when not doing judo, it is rumoured that they occasionally carry out research for their D.Phils. How much of the detail our visitors understood was unclear, but particular credit goes to Silver Yui for taking on the task of interpretation. Yui is a Masters student in Classical Oriental Studies and her ingenuity in translating the finer points of Organic Chemistry and Plant Biology were quite extraordinary! I doubt whether she had encountered many of the words in English before, let alone in Japanese.

A final photo shoot in the Weston Library, where we were joined by Tokai Vice Chancellor, Dr Naoto Yoshikawa, and Oxford Pro-Vice Chancellor (and OUJC Senior Member) Professor Nick Rawlins, followed by another quick lunch at the YHA and we were waving our visitors goodbye as they departed for Heathrow and their flight home. We hope they enjoyed it and will retain the memory of their visit to Oxford for many years to come. Maybe one day they will be back at our university for academic reasons and join us in representing the dark blues.

My thanks to all those who rallied round to act as hosts including Professor Rawlins, Tony Sweeney, Chris and Carol Doherty, Becky Capel, Emma Burnett, Rachel Wheatley, and Gregor Cremosnik, and not least our two interpreters, Yui and Budokwai member Futoshi Kurimoto, who travelled to Oxford with Tony to be another Japanese speaking host. Next time we will do it in term time, when hopefully it will be a little warmer and full of students.