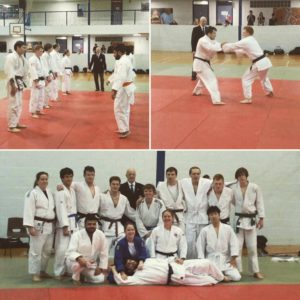 The event was held at the Brookes Centre for Sport in Headington, and the judoka got to display their skills in the prime location of the main hall.

The coaches wanted to take this opportunity to give more Kyu grades and novices an opportunity to compete, so each team consisted of one Dan grade male player, three Kyu grade male players, and one woman. Being a friendly competition, and as it was held with very short notice, the different teams within our club supplied players to each other in order to assure a more fair division of grades and weight categories.

Representing City were Jakob, Artem, Oleg, Andrew Serdega (switcheroo), and Abbie, with Chris coaching. The Uni team consisted of Woojoo, Alex, Valentijn, Rob, Nadia (swapped), and coach Gregor, and the Brookes fighters were Loic, Hassan, Locryn, and Sanna, coached by Matt. Recent injuries meant one spot was left unfilled, so Alex and Jakob subbed in for the Brookes team in order for everyone to get two fights each.

The fights were good and even, and expertly supervised by national referee Ron Cleere and wife Jean Cleere, who had come on very short notice to officiate. A huge thanks to them to help us execute a successful event. Fighting in teams is always a special event, and in the end City came out victorious with two wins.

After the fun stuff was over, players and officials headed to the sport centre’s café, where the Oxford Sport Council had supplied food vouchers and other freebies. After all the sports had finished competing, the scores were added, and the head of organising could proudly announce that the overall winner of the 2017 triangular tournament was Oxford City. The trophy was presented to judo’s very own Abbie, and hopefully the other teams will get a chance at retaliation at next year’s event.