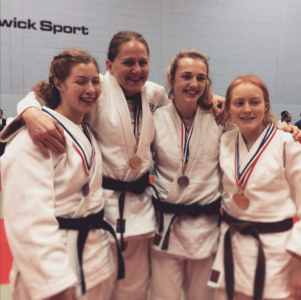 Warwick once again hosted one of the first all-grade judo competitions of the year, and as per tradition Oxford heeded the call by entering 14 players, which included four high grade women, two men’s teams of four high grade players each, and two individual lower grade men.

The day started off great with red belt Gregorian, one of this year’s beginners, winning silver in the novice u66s category. Especially impressive were his beautiful Seoi-nages! Orange belt Niall fought in the u90s in the same category, and after having a good go at his opponents he was rewarded with the gold medal.

Next up were the women, who between the four of them won a total of 7 medals. Brown belt Ellie and 1st Dan Emma both fought in the u57s, which was comprised of one u48 (Ellie), three u57s (including Emma), and one u58s. Being the lightest Ellie nonetheless scored two ippons and took gold in her category, while also winning the open lightweight division and collecting 27 more points towards her 1st Dan, leaving her only 6 points shy of her black belt. Emma obviously whipped out some ippons and a waza-ari of her own to take silver in the u58s.

2nd Dans Rachel and Abbie were pooled together into the u70s, where they both had three wins each, leaving Rachel with the gold medal in the u63s and Abbie with the gold medal in the u70s. Then they both went to fight in their respective weight categories’ opens, where Rachel took silver and Abbie gold. The women’s impressive run ended with the organisers setting up a special “clash of the titans”, where the finalists of the different opens had the opportunity to fight each other for more points and glory. Rachel opted in and was faced with 3rd Dan u78s player Laura Dangerfield, and once again bossed her way to win with a waza-ari, therefore also collecting 27 points towards her 3rd Dan.

Finally it was time for the men’s high grade teams to fight. Oxford had entered two teams, which consisted of Henry Winney, Tom Chandler, Gregor Cremosnik, and Matt Edmans in team 1, and James Fowler, Tim Gentieu, Quincy van den Berg, and Liam Hart representing team 2. Having only four players in each team meant they automatically forfeited a fight in each match, but nonetheless they came out blasting.

The teams fought in each their pool, and after facing Dundee, Erdington, and Warwick 1, team 1 faced the highly unlikely situation that Dundee, Erdington, and Oxford had the exact same amount of points scored, something the tournament director commented that he had not encountered in 40 years of organising judo events.

The decision was made to have the u81s players represent each team in a rematch, and after two very equal and hard fights, OUJC president Gregor managed to battle Oxford 1 through to the semi-final.

Oxford’s 2nd team also went through to the semis after facing Coventry, Warwick 2, and Southampton. Coventry proved too snappy on the counters and won their match with a clean sheet, leaving Oxford 2 keen to get revenge against Southampton, where they won all their fights. With an ippon, a hold down and a tap out, Oxford 2 also beat Warwick 2 and progressed to the semi-final.

Unfortunately both teams lost out on the finals after being narrowly beaten by Coventry and Erdington, but luckily did not have to face each other for the bronze medal, as both teams were awarded a joint 3rd place.

Another stellar performance by our players, and wonderful to see new judoka get a chance to demonstrate their skills. As always a big thanks to Carol for coaching, and to Warwick for continuing to invite us to their event.