Once again the highlight of the university year was upon us, as 16 of Oxford Judo’s players representing Oxford University, Oxford Brookes, and Exeter made their way to Sheffield for the British University Championships. Unfortunately – as always with a sport like judo – quite a few players were unable to go due to injuries and other university related constraints. Below is the report from the events of the weekend:

Saturday saw all the competitors take to the mats in the individual competition. The dan grade competition saw Ella Joyce gaining points towards her 1st dan, Emily Hampshire smashing through her pool (and beating the eventual bronze medallist in doing so), OUJC president Gregor Cremosnik showing some beautiful ippons en route to a 5th place and Tom Roach progressing to the final 16. Brown belt Sam Garforth defied injuries to get some good fights in, and Brookes’ president Sam Richardson made his final appearance in competitive judo as he won his way through a huge pool of men’s O100s to claim an impressive 5th place.

On the hunt for treasure, big wins came from the likes of Rachel “big-guns” Wheatley picking up a bronze in the U57s, James “swift-sweep” Fowler taking bronze in the U60s and Ben “the menace” Skretting winning another bronze in the U90s.

In the kyu grade category, Sam Acreman progressed to the final 16 with some cracking ippons, demonstrating an incredible effort after everyone tying in points in his pool and having to fight his pool twice. In the U66s it was an all-Oxford semi-final, as Louis “dreaded-locks” Trebucq succumbed to Alex “whirlpool” Bridge, as the latter powered through to gold, claiming sweet revenge in the final as he beat the player who had given him his only loss earlier in the day, and Louis taking 5th place. Representing the women Claudia “tricep-asaurus” Havranek once again proved her dominance by claiming gold in the U70s. 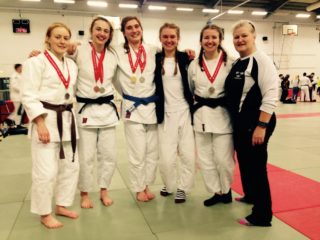 Sunday it was time for the teams to compete, with OUJC entering both a women’s and a men’s team to pursue their quest for bling. In the men’s competition, Ben “the menace” proved that revenge is sweet, beating his U90kg counterpart at Durham, who had beaten him in the semi-finals of the individual event just the day before. Forever-a-student Matt “Van Wilder” Edmans also proved he is worth his weight (+more) in praise as he held the Oxford pride high in the men’s open-weight spot. With commendable efforts, the men’s team consisting of James, Daniel, Gregor, Ben, and Matt made it to the semi-finals, but were narrowly beaten to claim a 5th place.

The women’s team then took to the mat, with Ellie, Rachel, and Emily keen to serve justice in the name of OUJC. After not entering a team for a few years, only to do a comeback last year as an unranked team and therefore being pooled with the two toughest contenders, this year’s incredibly strong women’s line-up won their pool, with Ellie Ridge picking up her final first dan points along the way. With captain Emily Hampshire retiring due to injury (and after a 5 second ippon win), Oxford then faced Bath in one of the most satisfying semi-finals we’ve witnessed.

With a 1-1 score after the first two matches, 2nd kyu Claudia “boombox” Havranek subbed in for Oxford against the Bath dan grade heavyweight, only to prove the old saying to not sell the skin before the bear is caught, as she threw her opponent with a powerful ippon accompanied by massive cheers from the sideline. This brought the ladies into the limelight in the finals against Wolverhampton, in which both Ellie Ridge and Rachel Wheatley improved on their previous day’s performances, with commendable fights, cementing the OUJC women’s team as deserving silver-medallists in the team contest. 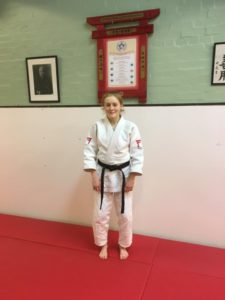 As ever, we are grateful to our coaches Chris and Carol Doherty for providing matside coaching, to captains Emily Hampshire and Pete Miles for providing support and wisdom, and to president Gregor Cremosnik for flawless logistical support and leadership. Also thanks to Japanese Olympic medallist Dr. Yoko Tanabe, who came to spectate and show her support for our players. And as one player put it: “even though I didn’t make it through my pool, it was a great weekend. Well worth it for the spectating and the spa. And witnessing how much food our heavyweights can chow down at the carvery.”

Update: Congratulations to our newest black belt Ellie Ridge, who passed her dan grade theory with flying colours on Tuesday, Feb. 21st. Go smash the tabs and get that well-deserved full blue of yours!