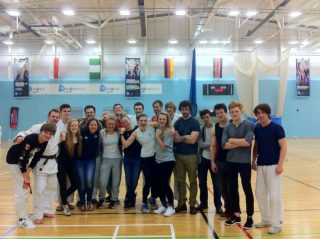 The annual London Area Universities and Colleges Open is renowned for that big o’ trophy they give to the most winning university at the end of the competition, so Oxford headed down to East London keen on getting our hands on that one.

With a record number of entries (13 from Oxford Uni and 3 from Brookes) the prospects looked good, and early on the medals started rolling in. In the junior division women’s captain Ellie Ridge took silver in the women’s high grades u52s, and Ella Joyce took another silver in the women’s high grades u57s. Fighting again in the senior higher grades division Ellie took another bronze, while president Rachel Wheatley won another silver in the u63s. In the senior women’s lower grades division Claudia Havranek won silver in the u63s, while Sanna Djurhuus took bronze in the u78s.

Oxford University were beaten by Edinburgh at 85 points, Anglia Ruskin at 66 points, and Bath at 57 points. But even though we missed out on the trophy this year we still managed to end up beating 42 other universities and colleges on points. More importantly Oxford Judo keeps increasing the number of players at competitions, both experienced and coming fresh from our own beginners’ course, so these are exciting times for the university side of the club. 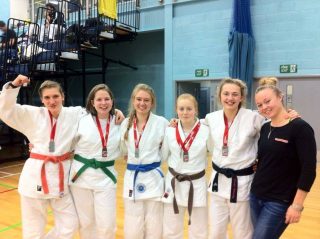 Also – did we mention how fierce the ladies are looking? How about this excellent obi rainbow of Oxford women from 4th kyu all the way up to 3rd dan. From left Claudia, Sanna, Ella, Ellie, Rachel, and coach Jordan.