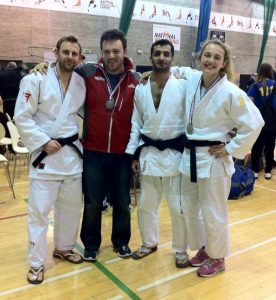 This Sunday four judoka from Oxford Judo participated in the BJC National Open Championship in Kettering. Undergraduate student Sam Richardson (Sport and Exercise Science at Oxford Brookes), and DPhil students Tom Roach (Engineering at Exeter/Oxford Uni), Rachel Wheatley (Plant Sciences at Oxford Uni) and Mehdi Imani (Engineering at Oxford Uni) all left Oxford bright and early to catch the morning weigh-in before waiting until mid-afternoon for their competitions to start.

Depending on their sizes each category was fought in either a round-robin or elimination format. Mehdi had an especially tough pool in the men’s u66s and was unfortunately unable to go through. Sam succeeded in taking silver in the men’s o100s, Rachel took silver in the women’s u63s, and Tom proved he means business as he took his first medal since becoming a dan grade, a well deserved bronze in the men’s u73s.

Another great show of judo from our players in a strong competition, and absolutely wonderful to see how Oxford Judo’s very own 2013 beginners Tom and Mehdi are starting to make their marks in the dan grade divisions. Four judoka representing three universities and three different fields of studies taking home three medals – not a bad Sunday tally.